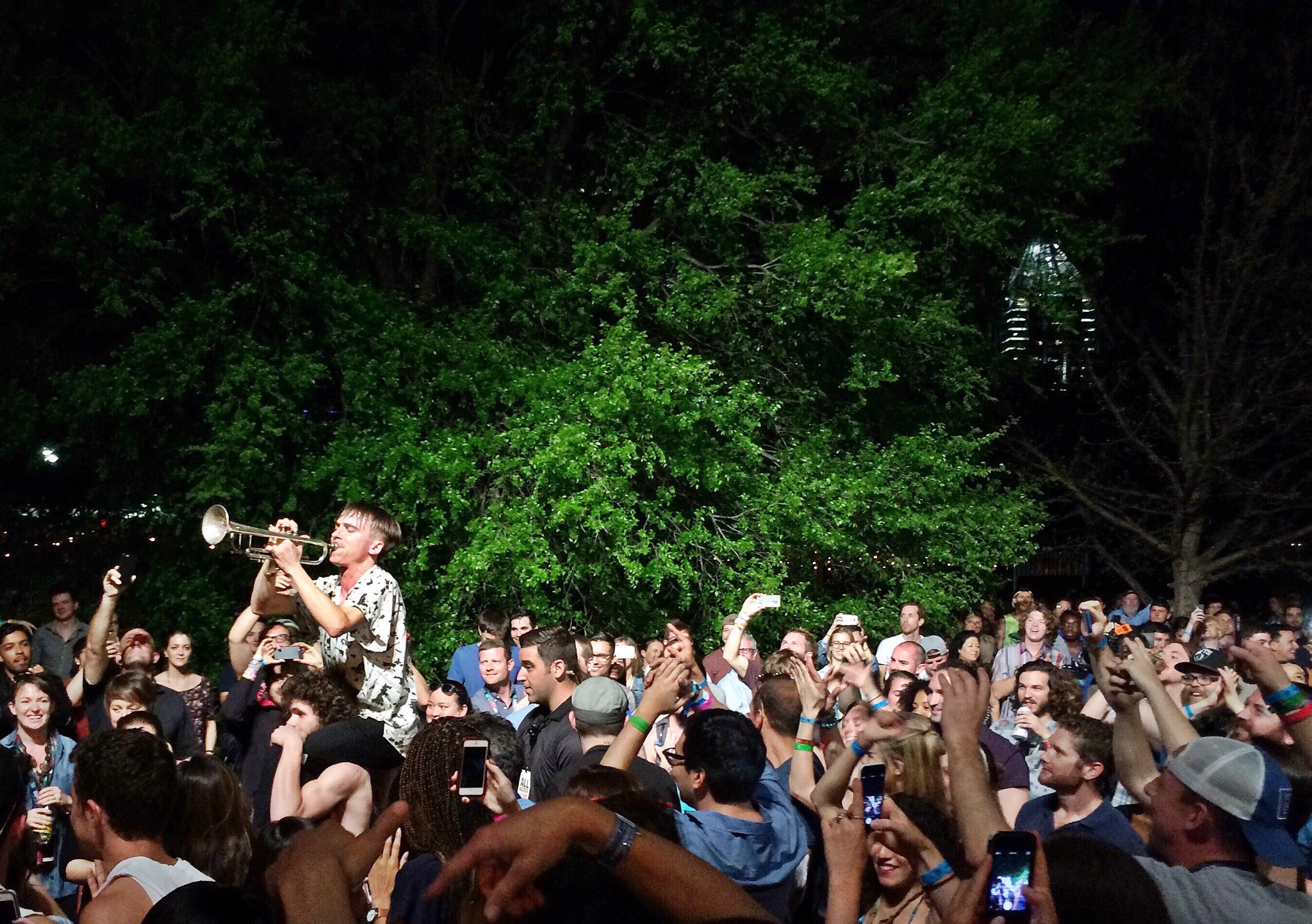 It was March of 2015. The South By Southwest (SXSW) festival was in full swing, and the indie band Rubblebucket was on stage. Midway through their hit, “Carousel Ride,” Alex Toth – the trumpet player and band leader – launched into the crowd and hopped aboard the shoulders of a 23-year-old fan named Brian Philhower.

Brian passed away tragically about a month later.

Kayla Philhower, Brian’s older sister and my friend from high school, recalled Brian saying that he wanted to find video of that moment to show her and her daughter, so she took to the internet. What she came upon was the following photo:

Kayla was able to get a hold of Toth through a series of phone calls and emails, and here’s what he had to say:

I remember that show and I remember Brian being so amped and super solid. If/When I ride someone’s shoulders I scan the audience for someone who seems strong and and genuinely into the music and he was that. It was incredibly epic.

I just did a search of Rubblebucket on instagram and found a bunch of IFC show photos/videos but nothing of shoulders. Then I searched photos we were tagged in and this amazing one popped up. A friend of mine actually made it and posted it to her instagram. She’s the girlfriend of a great drummer named Ian Chang who actually sat in with us that night. She had texted me this photo. I just reached out to her to see if she could send me the original unedited one as well. She sends her condolences and says she will look for it.

Please let us know if there’s anything else we can do.

Sending love to you and your whole family from Rubblebucket.

Isn’t the internet unbelievable? If this had happened a decade ago, this information probably wouldn’t have been nearly as accessible. Never in a million years could Kayla have been able to share this photo with her family, or this video of the aforementioned performance with her little daughter who exclaimed, “Hey wait a minute, that’s my Uncle Brian!” when she watched it (you’ll spot Brian at around the 2 minute 13 second mark).

I know things can seem difficult sometimes. A common perception of what we see on the internet is that everyone is doing better than we are. That they’re more successful, better looking, or happier than we are.

If you take only one thing away, let it be this: people can be kind. They can be thoughtful. They can be friendly, empathetic, and willing to help in times of struggle or tragedy. If you approach the internet with that viewpoint and see your social feeds through a positive lens, it will be amazing what you’ll find.

My condolences go out to Kayla and her family. My gratitude goes out to Isabella Ferraro for so graciously sharing these photos with me. And my praise goes out to Rubblebucket for being so selflessly thoughtful.

Dan Schenker is a photographer, the son of entrepreneurs, an Independent Distributor at It Works! Global, and a puppy-dad to a beagle/chihuahua mix named Pepper with his lovely fiancé, Caity.

Even though you probably won’t get any ?

Everyone has a mailing list, right? I do too, but I almost never use it. If you want to tempt fate and get an update every time I remember that I have an email list, enter your information below.